When we use a tablet or laptop we look at it almost all the time. What we usually don’t realise is that there is interesting technology behind the image displayed on the screen. What exactly is an LCD display? When considering this topic, it is impossible not to go back in time a little, to 1888 to be exact, when Friedrich Reintzner, an Austrian chemist and botanist, discovered what you are currently looking at – liquid crystals – during his biological research. In 1964, the first liquid crystal display was created and 4 years later George Heilmeier developed the first LCD with dynamic scattering mode.

How does an LCD display work?

LCD display, or Liquid Crystal Displays, used on a large scale today display an image made up of millions of separate cells, which translate into their resolution. They are all based on several phenomena – the polarisation of light, discovered in 1808 by E.Malus, and the fact that liquid crystals can transmit and change polarisation. In a nutshell, the idea behind the LCD is to exploit the change in polarisation of light due to changes in the orientation of the liquid crystal under the influence of an electric field. 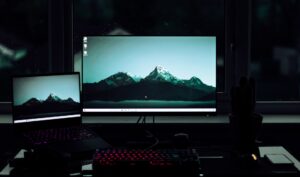 The principle of operation of all LCD displays is very similar, regardless of the exact technology used to make them. They are all based on four basic elements – a light source, a polariser, an analyser, electrodes and cells with liquid crystals embedded in them. The light is created outside the backlighting principle, because in LCD matrices the liquid crystals do not glow, unlike LED, oLED or AMOLED screens that use light-emitting diodes.